What are Seasoned Tradelines?

Are all tradelines considered equal before Lord FICO of the Fair Isaac Corporation? The answer might surprise you, or perhaps not. All tradelines are not considered equal. Perhaps you’ve heard this term “seasoned tradelines” thrown around. What does this mean? Is it as simple as taking your credit cards and sprinkling nutmeg or pepper on them? No, it’s not literal. More like if you’re talking about someone who has done a job for a while, you might hear them referred to as a “seasoned veteran” of whatever it is they do. Tradelines are similar to this. Tradelines that aren’t brand new are considered seasoned, but exactly where after being brand new do they become seasoned? If you own your own cards, how do you season tradelines? There are various schools of thought on this, but a general guideline is that tradelines become seasoned at the 2 year mark. If you take a look at the different credit age tiers on a site like Credit Karma, you can see that under 2 years is the very lowest, red, area of credit age. This is why it isn’t recommended to open accounts unless it is necessary, as the moment you put a brand new account on your reports, you are entering an account with zero history on your report that can drop your average history and thereby, your score.

How much do tradelines cost?

This has got to be the single most common question we get at Boost Credit 101. We answer the phone, and within thirty seconds someone asks to see a list, or asks that question, how much do tradelines cost? And the answer is always the same, it depends. What do you need? Do you need a lot of history to pull up your average history, or do you need large limits? Why would someone need large-limit tradelines anyway? The answer to that question is simple, what you have reflected on your report usually goes some way to predict what you will be approved for when you apply for your own accounts. Does this mean if you get a 20k tradeline that you’ll be approved for the same amount? Sometimes, it depends on what you put for income and what else is on the report. We have seen large limits approved recently, but generally it’s not very easy to get approved for large limits right out of the gate. There is a secret here though. If you get an approval (which should be the general goal with tradelines) for a credit card and you don’t get the limit you want, you can call the company up every 6 months and ask for an increase. If your income justifies it, you will likely get a raise in limit.

That being said, does that mean you should just buy the cheap trade lines and hope for the best? That will depend on your situation, but we have a large list that you could even apply the term cheap seasoned trade lines to. If you want lines that have plenty of history but have lower limits, thus keeping the cost down, we have them; if you’re looking for large limits but lower histories, we have those too. We have large lines with large histories, and small lines with small histories. The cost is relative across the board. Usually we say a good budget for a single tradeline is anywhere from $200 to over $1,000, but remember, you get what you pay for.

Of course, if you have plenty of accounts open, a new one may not have as drastic an effect as on someone with only a few open accounts. And this is a bit of a clue as to why tradelines are so valuable. Let’s say you have a single open credit card account (and that’s all), and it’s brand new, as in opened last month. Your average history is at 0, but if you take seasoned credit tradelines, or just one old one, say aged fourteen years, well then your average history is going to be seven years, right at the tier where age starts being considered excellent. In the below example, you can see the Barclays is 4 years, 11 months old 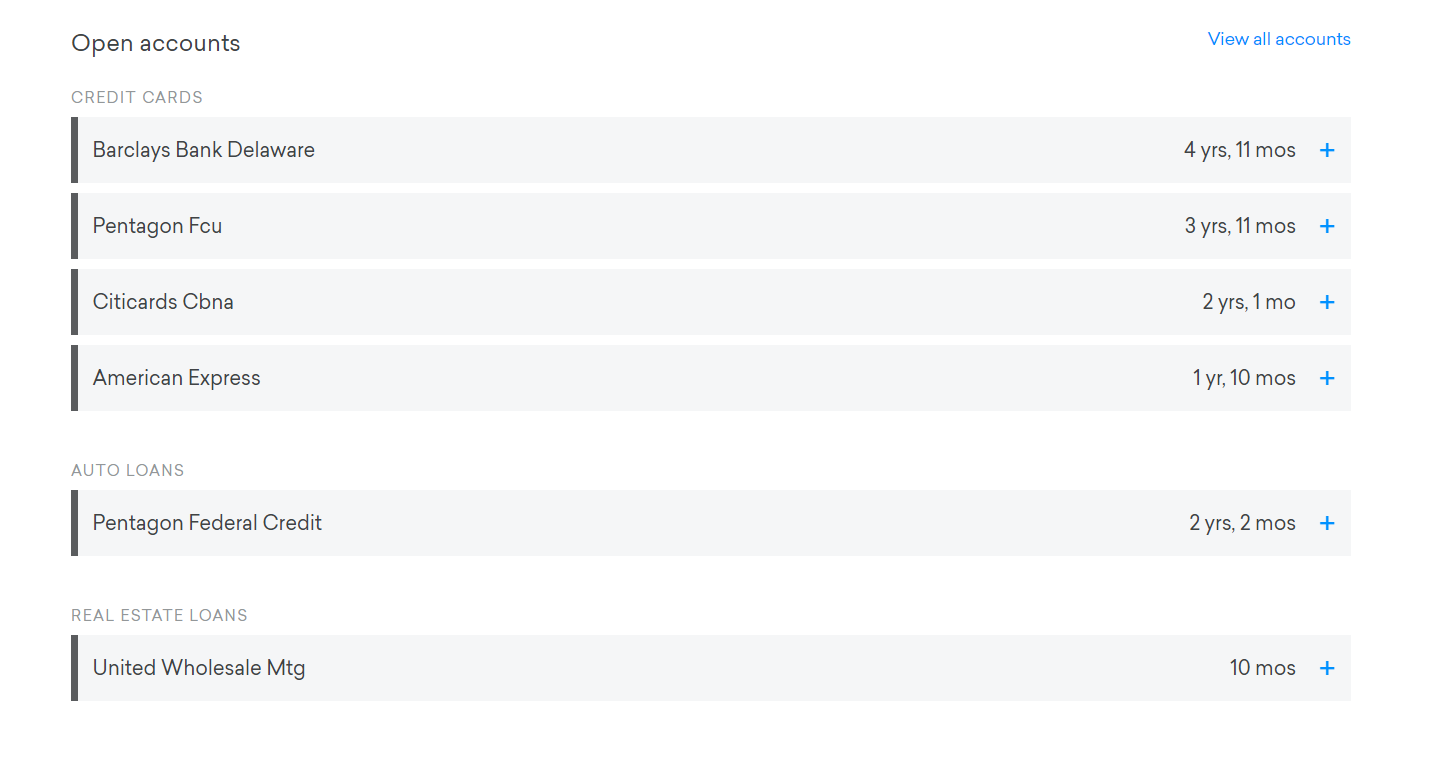 The total average history for this person is:

2 years and 7 months is a “D” rating as far as average history goes, but this person has credit scores in the 700’s, so we see that you don’t need very old credit to have excellent scores. Credit age is just one of the buckets that contributes to the FICO score, but it is a big bucket as far as influence, and one of the easier buckets to influence with tradelines.

What Should You Expect When Looking Into Credit Tradelines For Sale?

Is It True That Tradelines Are Instant Credit Builders?

STAYING REALISTIC WHEN YOU BUY TRADELINES